Water warms with the incumbent wet season weather. Crocodiles are starting to mate frequently. Male crocodiles will mate with multiple females during the breeding season. Males usually play no role in parenting.
Females will lay their eggs and build a nest over the eggs. The female protects her nest aggressively. They appear to go without food during most of this time, which is quite a sacrifice during the best time of year for feeding.
The eggs have an incubation period of around 80 days. The rate of development is strongly influenced by temperature. The warmer it is the faster they grow! After two to three weeks the temperature of the nest determines the sex of the embryo. Embryos around 31-32c tend to develop into males.
To hatch they use a piece of hard skin on their nose called an “egg tooth” to slit the eggshell and poke their nose out. She helps eggs having difficulty hatching by squeezing them gently between her jaws, before finally eating any dead or infertile eggs remaining. Hatchlings usually measure 20-25cm in length and weigh around 60-90grams.
The female looks after her young usually for several weeks or months after hatching. They stay in regular contact by using soft chirping calls, and the female rushes to their aid if they produce strident distress calls.
Juveniles grow quickly by feeding on any small prey they can catch, usually fish, insects, frogs and shrimps. They survive by forming groups with their siblings, and staying close to their mothers. They use loud distress calls if they feel threatened, and most adults will rush over to help.
Juveniles have bright markings and black bands which act as disruptive camouflage to hide them from predators.
Next time we will discuss what happens as they get bigger.
Don’t forget to come down to Croc Cove and have a hold of our baby crocodile. 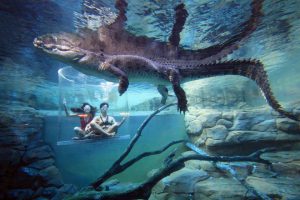 The Cage of Death - Crocodile dive

3 peas in a pod 💚 Our Cage of Death locals spec

"What touched my foot?!" Even salties gotta lean o

Who’s up for meeting the reptiles these school h

Are you ready to start ticking those Territory exp